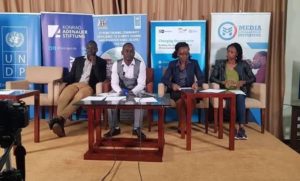 Media Challenge Initiative in partnership with the Office of the Prime Minister (OPM) is set out to train 500 young journalists in effective reporting on climate change in the 2019 Climate Change Media Challenge running from the 1st – 3rd November 2019.

The Media Challenge Expo is a three-day festival under the theme ‘Reporting on Climate Change and Disaster Risk Reduction in Uganda’ and will bring together the media fraternity for conference sessions on improving climate change communication, a journalism career fair for students, more than 15 different journalism skills trainings, and a live news reporting competition for university teams.

Rebecca Sserwanga from the Office of the Prime Minister- Climate Change Department, one of the Funders of the project highlighted that journalists have a major role to play in creating public knowledge about the increasing threat of climate change.

“It is a collective effort. We are increasingly seeing unprecedented warming temperatures, and what is the cause of this? It is our human activities.

“We need to restore wetlands, plant trees to bring our environment back to the optimal state. It is the role of journalists to increase awareness, which is why we are supporting the Media Challenge Initiative projects,” said Sserwanga.

The Office of the Prime Minister is currently undertaking a project on Strengthening Community Resilience to Climate Change and Disaster Risks (SCORE) supported by the United Nations Development Programme (UNDP) in conjunction with Ministry of Water and Environment (MWE).

The 2019 Climate Change Media Challenge supported by DW Akademie, Konrad-Adenauer-Stiftung Uganda, US Mission for Uganda, OPM and UNDP, UNESCO, Coca-Cola and the African Centre for Trade and Development intends to contribute to the employability of young journalists as well as improve the media’s communication of climate change issues so as to enhance public awareness and climate action.

“We are implementing the Climate Change Media Challenge projects to improve effective reporting on climate change and disaster risk reduction.

“In the process, we want to increase awareness of the intensity of climate change and disasters in Uganda,” said Abaas Mpindi, Media Challenge Initiative CEO.

“Our ultimate aim is to promote individual responsibility through storytelling, showing the world what is going on and enabling them to act to protect their communities.”

Ojok Okello, Programme Manager at Konrad Adenauer Stiftung (KAS) Uganda, one of the project’s funders, highlighted that journalists must be able to understand climate change issues due to the high number of fallacies and lies around the issue.

“To talk about facts: In one year we have seen the most fluctuation in rainfall in recent years in Uganda,” he said.

“So for you to have evidence and facts, you need some kind of training and experience sharing like Media Challenge Initiative is offering in this Expo.”

Climate change and disasters are a significant threat to Uganda, especially in the agriculture sector, which is the backbone of the nation’s economy.

While some regions such as Karamoja are increasingly affected by crippling drought, others such as the eastern Bugisu and Teso subregions are receiving above-normal rainfall, contributing to devastating floods and mudslides.

The changing seasons are reducing farmers’ yields. But public knowledge of climate change is lacking: The media is an important actor in filling this information gap.

This year’s event will include special training for professional journalists, citizen journalists, and university journalism lecturers in climate change reporting.

The Media Challenge Initiative will also kick off the first national Climate Change Media Awards, where the best student and mainstream journalists reporting about climate change issues will be awarded.

“Our alumni are populated in all the major media houses in Uganda. We are building a community of journalists who believe they have a role to play in transforming the community through the stories they tell and how they tell them,” Mpindi said.

No Result
View All Result